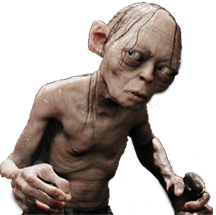 Where isst it? So it iss back - so fissh, the fish, raw and wriggling, he hasst brought its back!

Angband, the Hells of Iron, yest, the ancient ASCII roguelike, child spawn of Moria and VMS, it iss here once more. We wants it!

You hasst not seen it, Angband? But perhapss you have seen one like it, the filthy, filthy NetHack, yess, full of such stupids and jokeses, and no Smeagol! We hates it for ever! But we loves Angband, yess, Angband has Smeagol and the fat hobbitses and yes, it has my preciouss! We loves it, Angband!

But fissh hasst brought it to Cocoa, now, all fresh and it glitterses so subpixel pretty with Quartz, and resizesss so smooth, and animates with pretty graphics! So precious to fissh.

And ssuch love for Angband so fissh made a borg screensaveres! So now you can visits Smeagol and wring the filthy little neck of Saruman and murderes the fat Morgoth in your sleep! The screensaveres, yes!

Goes there now, fat hobbitses! The game and the screensaveres and the source codess! Angband need you, yess!

Edit: fissh has fixed the problem with the screensaveres needing Angband to have been launched first. It should work no problems now.