recent posts | all posts | about fish
Array
Our arrays, aren't.

There, that's known as a teaser. You see it in television all the time. "Find out which common household plant devours pets at night...but first." And then you have to sit through and watch the stuff about Brad and Angelina shacking up / Shaq driving his new Hummer / Hummer's new fragrance before they get to the good stuff, the petnivorous plants. I don't know what I'd do without TiVo. And here I've done the same thing as the networks. Shame on me. I'll get to it, I promise.

But first, let's talk about data structures. I'll try to make this more interesting than Donald Trump's new reality fragrance SUV. Data structures are really important, we're lead to believe, so important that entire classes in CS curricula discuss nothing else all year. Gosh! Let's look at all the data structures we have available in Java.

That's 22, by my count, excluding the legacy classes like Vector.

Here's the data structures we have in standard C++:

That's, uh, 17. Here's what I noticed while writing these up: most of these classes tell you how they work, right in the name. CopyOnWriteArraySet is a set that implements copy-on-write and is backed by an array. ArrayList is a list implemented via an array. hash_multimap is a multi-map implemented via hashing. And so on.

Here's all the CoreFoundation collections, leaving out the immutable variants:

The array that wasn't

Take a look in CFArray, at this strange comment:

It's like Apple skipped out on some sophomore CS lectures. Everyone knows that arrays don't have logarithmic lookups - they have constant time lookups. But not these "arrays!" (necessarily!) In fact, you might notice that the guarantees Apple does make are weak enough for CFArray to be a hash table or binary tree. Talk about implementation latitude! Is there any payoff?

Let's try some operations and see how CFArray compares. Well take an array with 100,000 values in it and time inserting, deleting, and getting items, each from the beginning, end, and random positions, for CFArrays, an STL vector, and a "naïve" C array. Then we're going to do it again starting with 200,000 elements, then 300,000, etc. up to one million. Whoo, that's a lot of permutations. I don't want to do all that. Lovely assistant?

Go write that thing I said.

Thank you. I've enclosed my source code here; if you want to reproduce my results, run the test.py file inside it. As I said, we're doing various operations while varying the initial size of the array. All of the results are expressed as a multiple of the result for an array with 100,000 values. That means that if the green line is higher than the red one, it doesn't mean that the green operation was more expensive than the red one in absolute terms, but that the green one slows down more (as a percentage) than the red one as the array size increases. A line going up means that the operation becomes more expensive with larger arrays, and a line staying flat means its expense does not change.

Here's what I get for my quicky naïve C array: 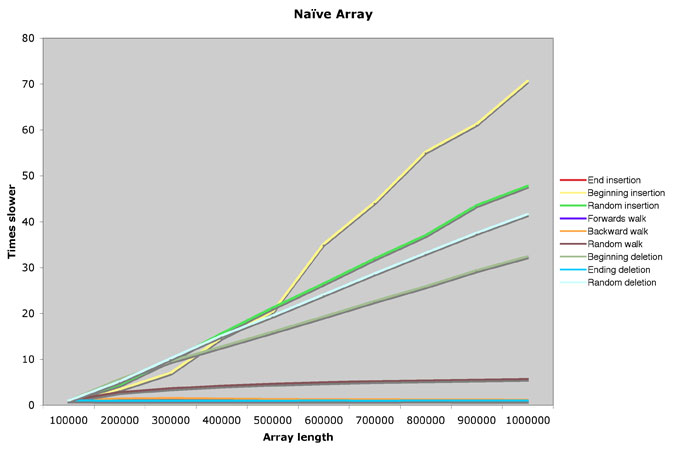 Ok, so what does this mean again? The green line is at about 50 for a length of 1,000,000, so inserting data at random locations in my C array is about 50 times slower than doing it for a length of 100,000. (Ouch!) But no real surprises here; insertion at the end is constant (flat), insertion at random locations or at the beginning is roughly linear.

Here's what I get for the STL vector template: 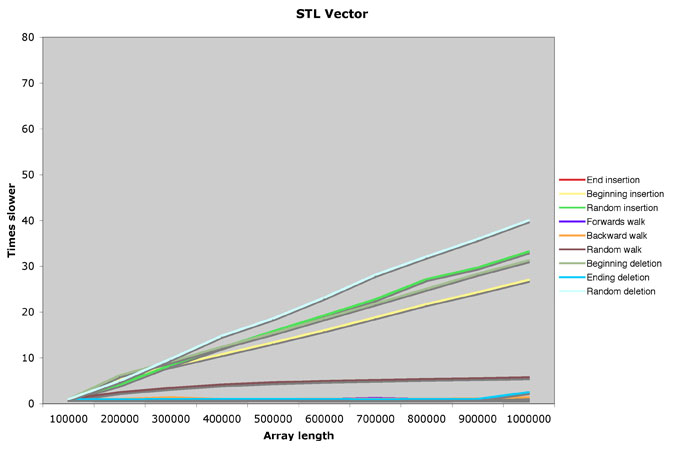 Right out of a textbook. Insertions and deletions take linear time, except for at the end where they take constant time, and lookups are always constant. 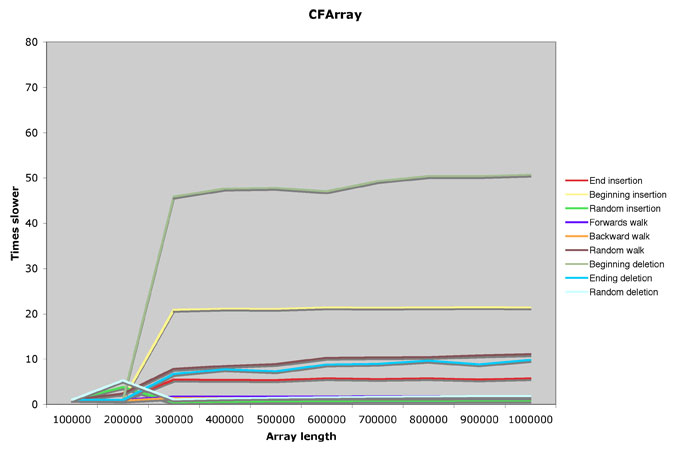 Say what? I was so surprised by this, I had to rerun my test, but it seems to be right. Let's catalog this unusual behavior:

So it sure looks like CFArray is switching data structure implementations around 30,000 elements. And I believe there's lots more implementations that I haven't discovered, for smaller arrays and for immutable arrays.

I guess I've got to come to a conclusion or three. Ok, here we go, in order of increasing broadness:

PHP fakes you out with arrays as well - they're associative or numeric, and can be used as hash tables. Something strange is going on there too. Now I think from reading this and looking at some of the Zend code that arrays in PHP are straightforward hash tables with a cursor for fast enumeration and don't do any of the polymorphic trickery that CFArray does. But I'm not sure; if you know more about PHP's array implementation I'd love it if you posted in the comments!